For the fifth consecutive year, the Bloomfield Center Alliance (BCA) held its downtown Holiday Window Design Contest. Thirteen downtown businesses signed up to compete for the title of best holiday window display. With pictures of each window posted on the BCA Facebook page, votes were collected as "Likes." After a nine day period, the winner was announced as J. T. Murdoch Shoes. This is the first time the family-owned business has won competing every year since the start of the contest. The competition was fierce this year with the Italian American Buccos Restaurant coming in second place in terms of the number of posted "Likes." The popular downtown restaurant entered the contest as defending champ and its owners were determined to repeat, but had to settle for runner-up after a surge of votes for the specialty shoe store in the final hours (a record 1,400 votes was collected)! Ecstatic with the win, J. T. Murdoch Shoes' owner Mary Murdoch shared, " We've always loved this contest and are happy to have won. The spirit of friendly competition it brings out amongst the participating stores makes it a lot of fun. But in the end who won is not as important as the attention and exposure for the businesses given the hundreds of people who go online and vote. I think it's also nice that the contest creates the opportunity for the owners to connect and get to know each other. Thanks to the BCA for continuing the competition. I also want to thank the other businesses who with their participation helped Bloomfield Center look more festive this season" This year's participants included two new businesses in Bloomfield Center - Six Points Pub and Toni's Community Closet. Other businesses were: Amazing Escape Room, Arlene's Bridal Salon, Bloomfield Black and White Taxi, Civilized Nation, Easy Pickins, ESTIR Insurance, Jalapeno Cycling, Ricciardi Brothers Paint, and Vega Palace Jewelry. Commenting on the record number of votes and the level of online buzz generated around this year's contest, BCA Executive Director Ollyn J. Lettman said, "We are extremely please with how many of the businesses this year promoted themselves and the contest to their friends and customers. In our mind, the more people brought to our Facebook page to see the pictures and cast their vote, the greater chance they will see the other great things going on in Bloomfield Center. While there's only one winner in the contest, in the larger scheme of things, we all win with the attention being brought to the district." The BCA thanks everyone for making this year's competition so interesting and fun. A special note of thanks to Bloomfield College student Carl Wiggins who took all the pictures of the competing holiday windows.
Share This Page 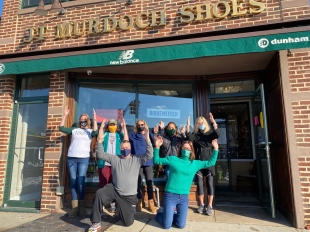 Mary Murdoch and her team celebrate their win! 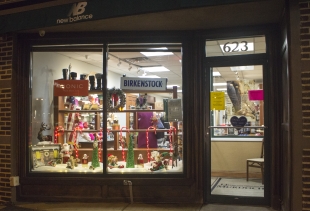