Bloomfield Center suffered a great loss on Monday, January 21st as a catastrophic fire destroyed a two-story building located at the corner of Glenwood Avenue and Washington Street. The building was home to several businesses, including one of the oldest serving this community - Roxy Florist. The fire also displaced the Bloomfield Center Alliance whose offices were located on the second floor. Other business from the building directly affected include: Heavenly Bites/Heavenly Flavors, Kolby's Barber Shop, Law Offices of Salvatore Alfano and Joseph Fusella, and Winfield Security Corporation. In addition, a new business just weeks away from celebrating its grand opening was also impacted - Samadhi Yoga Studio. The BCA is grateful that no one was hurt or injured in this tragedy, but acknowledge that the impact to the community is severe. Reacting to the major event, BCA Director Ollyn J. Lettman states "We are committed to recovering as quickly as possible from this unfortunate incident and continuing our efforts to promote and support the long term growth of downtown Bloomfield. We are also grateful for the expressions of support from so many in the community. Our hearts go out to all those affected. We will remain strong and persevere through this latest challenge." Thanks to the generosity of Bloomfield College, the organization will be operating out of a small office on the campus for the immediate, short term future.
Share This Page 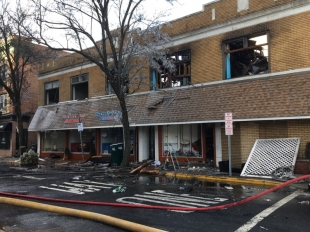