The Bloomfield Center Alliance recently announced the winner of its annual downtown Holiday Window Design Contest. Now in its fourth year, the organization sponsors the campaign as a way to not only help make the downtown look more festive with a little friendly competition amongst local businesses, but also market and promote those participating and downtown district. Bucco Italian American Kitchen came out as the "People's Choice" winner after the photo of its decorated window garnered the most "likes" on the organization's Facebook page. In second place was J. T. Murdoch Shoes, a family-owned business serving this community for several generations. A first-time participant in the contest, Bucco competed alongside thirteen other businesses whose holiday windows were viewed by dozens of people (over 450 votes were logged). Other participants included: Bloomfield Taxi, Bloomfield Wax and Skin Care, Civilized Nation, ESTIR Insurance, Easy Pickins, Jalapeno Cycling, Ricciardi Brothers Paint, Roxy Florist, Shine Custom Jewelry, State Farm Insurance-Diane Smith, Ultimate Visions Hair Studio, and Vega Palace Jewelry. Business who have won in the past include: Anthony's, Gail Ann's Beauty Salon, Arlene's Bridal Salon, and Ricciardi Brothers Paint. Commenting on the contest and victory, restaurant owners Frank Bucco and Jen Denboer share "We are so grateful to everyone who took the time to vote for our display. This being our first holiday season here in Bloomfield Center makes it so much more exciting to be part of this great activity. It was fun to decorate and even more fun to see and hear how so many enjoyed our decorations." The restaurant which just opened on Washington Street in May, also celebrated the news that it was recently named among the "Top 50 Places to Eat in North Jersey" by Yelp.com. The BCA would like to thank all involved in this year's contest, including Lamar Wedding Center, who assisted in taking pictures of some of the storefronts. The full service planning company recently moved to Bloomfield Center partnering with Arlene's Bridal Salon.
Share This Page 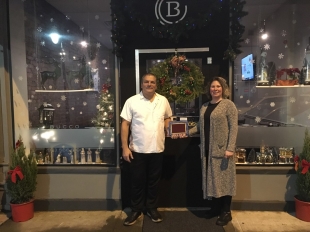 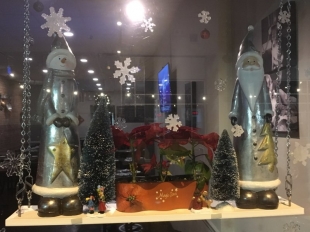