Dinner and a Show Campaign Promotes Arts and Dining

Bloomfield, NJ – The Bloomfield Center Alliance (BCA) announces the next phase of their Dinner and a Show campaign promoting both the arts and dining here in Bloomfield’s downtown district. Those attending the upcoming musical production of Guys and Dolls in Concert at Bloomfield College’s Westminster Arts Center (WAC) can enjoy exclusive deals at three of Bloomfield Center’s great restaurants – Aki Asian House, Bloomfield Steak and Seafood, and Villa Italiana. Three shows are scheduled for September 30th, October 1st (8 PM) and October 2nd (3 PM). The musical is being produced by the 4th Wall Theatre, one of WAC’s theaters-in-residence. By showing their tickets or other proof of purchase (such as an online purchase printout) at any of the participating restaurants, audience members will receive the special discounts. First introduced in June, BCA Director Ollyn J. Lettman explains that the goal of the Dinner and a Show campaign is to “. . . promote two things that we have right here in Bloomfield Center – the excitement of live performing arts and a growing restaurant scene that offers residents and visitors a choice of excellent culinary options. We hope that people will come to see our downtown as a place where they can have both.” This is not first time the BCA and the 4th Wall Theater have worked together through this campaign. The new initiative was unveiled earlier in the year in support of the company’s production of Big Fish, another musical than had a six-day run in June. Speaking of the collaboration, 4th Wall Theatre’s Executive Director Gwen Ricks-Spencer says, “Partnering with the BCA is important because the organization really has its finger on the pulse of what's happening around Bloomfield and I believe uses its platform to share information beneficial to everyone in the community. We are very encouraged by the enthusiasm and energy that the BCA brings to the table and look forward to sharing our work with the Bloomfield community, while helping promote the downtown district’s restaurant community.” This is the third run of the Dinner and a Show campaign and to date several other restaurants have offered special discounts in support of the initiative. They include Cousins Pizza, Essex Junction Craft Kitchen and Bar, Heavenly Bites/Heavenly Flavors, IHOP, and Italia Pizza. The goal is to eventually have all Bloomfield Center restaurants participate, on a rotating basis, in conjunction with future productions at the WAC. For more information about the Dinner and a Show Campaign, including specifics on the great deals at participating restaurants, please visit the 4th Wall Theatre’s website at www.4thWallTheatre.org for information on the show and to purchase tickets.
Share This Page 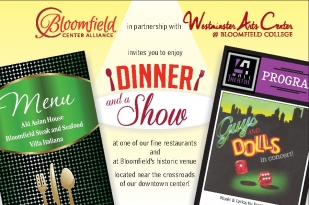