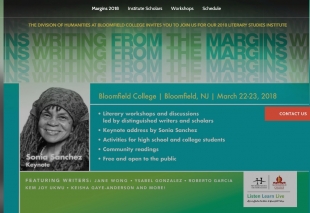 Keynote Address The keynote address will be given by renowned poet Sonia Sanchez on Thursday, March 22 at 6 pm in Franklin Hall on the campus of Bloomfield College. A Q&A session with Ms. Sanchez will be held on Friday, March 23 at 12 pm. Free and open to the public Sonia Sanchez Keynote speaker Sonia Sanchez is the author of over 16 books including Homecoming, We a BaddDDD People, Love Poems, Ive Been a Woman, A Sound Investment and Other Stories, Homegirls and Handgrenades, Under a Soprano Sky, Wounded in the House of a Friend (Beacon Press, 1995), Does Your House Have Lions? (Beacon Press, 1997), Like the Singing Coming off the Drums (Beacon Press, 1998), Shake Loose My Skin (Beacon Press, 1999), and most recently, Morning Haiku (Beacon Press, 2010). A recipient of a National Endowment for the Arts, the Lucretia Mott Award for 1984, the Outstanding Arts Award from the Pennsylvania Coalition of 100 Black Women, the Community Service Award from the National Black Caucus of State Legislators, she is a winner of the 1985 American Book Award for Homegirls and Handgrenades, the Governors Award for Excellence in the Humanities for 1988, the Peace and Freedom Award from Women International League for Peace and Freedom (W.I.L.P.F.) for 1989, a PEW Fellowship in the Arts for 1992-1993 and the recipient of Langston Hughes Poetry Award for 1999. Does Your House Have Lions? was a finalist for the National Book Critics Circle Award. She is the Poetry Society of Americas 2001 Robert Frost Medalist and a Ford Freedom Scholar from the Charles H. Wright Museum of African American History. Sonia Sanchez has lectured at over 500 universities and colleges in the United States and has traveled extensively, reading her poetry in Africa, Cuba, England, the Caribbean, Australia, Europe, Nicaragua, the Peoples Republic of China, Norway, and Canada. She was the first Presidential Fellow at Temple University and she held the Laura Carnell Chair in English at Temple University. She is the recipient of the Harper Lee Award, 2004, Alabama Distinguished Writer, and the National Visionary Leadership Award for 2006. http://soniasanchez.net/bio/
Join Our Social Circles
Join Our Email List